How many of you don’t like physics as your chapter? Many of us, right? You came to the right place for a perfect solution.

These two words sound similar, but they’re far different from each other in quantitative terms. Let’s understand these two terms in brief:

The exact length from one point to the other is known as distance. For example: If XYZ person goes for personal work, and from his home reaches the bank, which is 2km away and from there he moves ahead for his office, which is still 1.5 km away from the bank. So he traveled almost 3.5 km, which is considered a distance that is also referred to as a scalar quantity.

Below we have attached an image for better understanding: 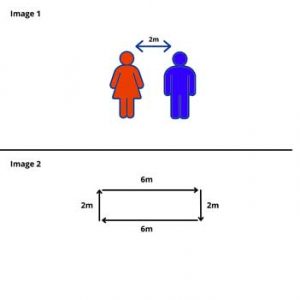 Image 1: The girl is standing 2 meters away from a boy; 2 meters is the distance between them.

Image 2: On a college campus, the lecturer moves from class 1 to class 2, which is 6 meters away from the staff room. After that, for the second lecture, he went more than 2 meters, the 3rd classroom is also 6 meters away from the second, and to reach the 4th class, he needs to walk more than 2 km. To finish his lectures he travelled : 6m+2m+6m+2m= 16m. Hereby, 16 meters is the distance covered by the professor.

To calculate distance, two important variables are required. The first one is speed. Speed is the numeric value of how fast a person has reached his/her destination. The second one is time. Time is the number of seconds/minutes/hours taken to reach a particular destination. You can better understand it in the formula given:

Abhishek goes to his farmhouse in his car at 40 km/h. It takes him 2 hours to get there. How far away is the farmhouse?

Hence, Abhishek’s farmhouse is 80 km away.

Displacement originated from the word displace, which means the motion from the actual position. The movement of an object from one place to anywhere is known as Displacement. In physics, it is also known as a vector quantity. It is always connected with the direction in which anything moves.

When a particular object travels from one place to another in a particular direction in a given frame, the change of the object’s distance is known as Displacement. The formula is given below: 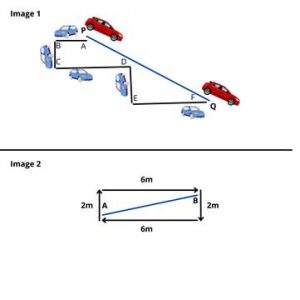 Image: 1
According to the first image, the Red car travels from point P to reach Q in a downwards direction which directly indicates the Displacement between two points.
While the blue car is traveling to point A to point F using different directions and covering large areas, which indicates the distance covered by the cover that you can easily measure.

Image 2:
The second image shows you how Point A is a little bit far from point B; there is no need to measure the area covered, just like distance. Displacement is also shorter in length.

Distance V/S Displacement: Lets discuss the difference between these two in the form of table:

Let’s solve some questions of Distance and Displacement using the formula:

Quiz 1. Alisha travels 280 miles to the South but then back-tracks to North for 110 miles to pick up her parents from the airport. What is Alisha’s total Displacement?

a) Calculate the distance covered by the car using different routes.

b) calculate the magnitude of the moving car

a) The distance covered by the moving blue car is calculated as follows:

The distance covered by the blue car is 7.5 km.

b) The Displacement is the shortest length to reach any point.

The image shows that the red car travels from A to F directly, and the length between both the points is 5 km. Similarly, the magnitude is also 5.

Distance and Displacement is one of the most important parts of physics. But children of grade 5 or 6 get confused with both the terms and don’t even try to clear this concept. We tried to simplify this concept appropriately and effectively to help your ward correctly and effectively with a few examples. We hope this will be helpful to you. If you have any doubt regarding the same and need more examples, don’t forget to drop your question in the comment box, our team will reach you as soon as possible.